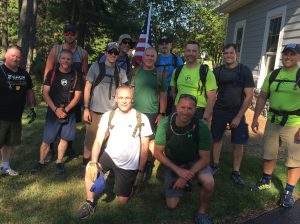 First, YHC would like to apologize for the lateness of this backblast. Froman and Ticket have both been on me about getting it done, but this is the first chance I’ve had to actually sit down and complete it. I’ll do some extra ‘Mericans next time we cross paths!

About a week before the ruck, YHC sent a message to the PAX that had already HC’d letting them know that the start point would be revealed to them by playing a game of 20 questions. For each question they asked that got answered with a “No,” a coupon would get added. For each question that was answered with a “Yes,” a coupon was taken away. If they were able to figure out the location before asking 20 questions, then there would be no coupons. It was a bit silly, but the PAX embraced it and figured out the start point in about 10 questions. No coupons!! Oh, we were starting at my house.

PAX were instructed to bring a 12 foot length of climbing rope and a carabiner that were rated to hold at least double their body weight. They also needed to have the appropriate weight plate, at least 2 liters of water, and emergency contact info. Start time was 1800 hrs, but they were asked to arrive about 15 minutes early for inspections.

El Chapo was first on the scene at about 1730 hrs. He was already covered in sweat and looked like he had just come out of the shower. Other PAX started trickling in, and everyone was there by 1740 hrs. Oh wait, forgot that The Colonel didn’t show until about 1759 hrs…in flip flops…with no water…ruck half packed. But since he had a long way to travel we cut him some slack. 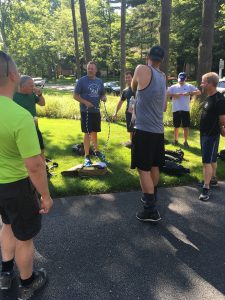 Once YHC made sure all PAX had the necessary equipment, we huddled up and went over some safety pointers, general route location, and the need to constantly be drinking water. YHC explained that his idea of rucking is putting in some serious miles under a moderate load at a consistent pace. Moving with a purpose and having some laughs/discussions along the way!

With that done, Dauber grabbed the shovel flag and we started on the route. We traveled W/SW through the neighborhood until we reached Sylvania Ave and then continued West for about 1.5 miles. This was the only section of the route YHC was concerned about since there is no sidewalk and cars travel at a high rate of speed. The pace was pushed a bit so we spent the least amount of time as possible on this section. We eventually made it to the Sylvan Prairie bike path near Timberstone Junior High. Basically traveling North, we crossed Brint Rd and continued on the bike path by the quarry. Here we took our first stop to refit, get some electrolytes/food, and make a pit stop. We had covered 4 miles at this point. 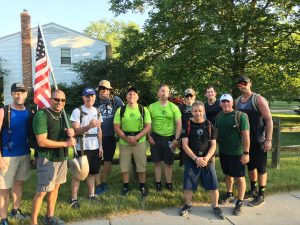 After about 10 minutes, we headed North on the path, passed Fossil Park, and continued along the path to Centennial Quarry. From here we headed E/NE along Erie St. Stamper was feeling the effects of the heat, so we made a stop to get him hydrated and cooled off. After some energy beans and passing his ruck off, he was ready to go again. The Hoff made a great suggestion to stop at Highland Meadows Country Club to fill up on water – he had connections! PAX hid in the bushes while the Hoff dragged a hose through the parking lot, and we took care of business. Pretty sure we didn’t offend anybody! PAX were feeling refreshed at this point, so we pressed on towards downtown Sylvania. Ollie gave us a shout out as he was driving by on his way to dinner with his M!! 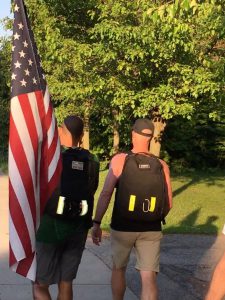 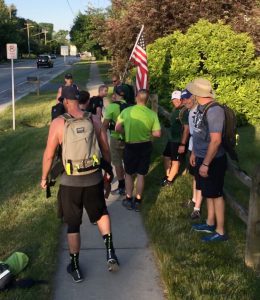 As we entered downtown, Gap was really feeling it and couldn’t get enough of the excitement of rucking. Dude was dancing down the street! 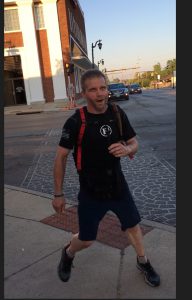 From this point, we headed South on Main St and continued into the parking lot behind Root, Inc and into a grassy area with a few nice big trees which provided shade and some needed anchors for the activity YHC had planned. We had completed about 7.5 miles at this point and took another break to refit, refuel, and make a pit stop.

Once everyone was ready, YHC had everyone get their length of rope and carabiner. YHC explained how one of his favorite things that he learned while in Army ROTC was building a One Rope Bridge and having the unit cross. Typically it is performed over a creek or river. YHC thought that 10 Mile Creek would provide a good spot to complete this task, but YHC was mistaken. YHC spent the afternoon scouting locations for a crossing by Northview and all through Harroun Park but couldn’t find an area safe enough to get it done. So, the grassy area with big trees was the next best thing! We started by going over instructions for the proper way to tie a Swiss Seat. This is basically a climbing harness that you create with a length of rope (thus the need for everyone to bring 12 feet of rope). If the PAX ever attempt to do this again, be advised that 12 feet of rope is good for someone like Gap or Splinter. However, El Chapo or Dauber probably need about 20 feet! 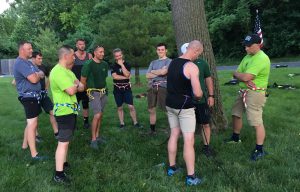 Once everyone was comfortably uncomfortable in their Swiss 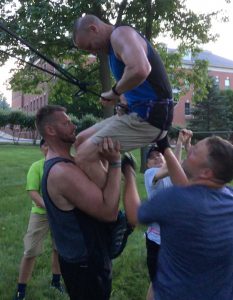 Seat, we moved on to construction of the One Rope Bridge. There is a series of minorly complex steps to complete this, including a few different knots tied into the rope, but YHC walked everyone through it, and we got it done. YHC could sense some apprehension amongst the PAX, so YHC took the lead and hooked into the One Rope Bridge with an assist from Dauber and El Chapo. Soon enough, the PAX 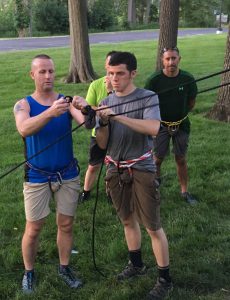 started hopping on the bridge and sliding across. It turned out to be a lot of fun, and hopefully something we can complete another time. Definitely a good team building exercise! 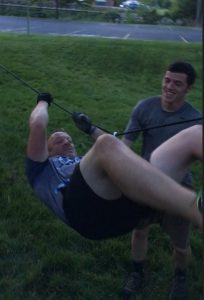 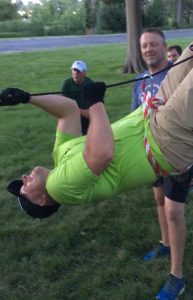 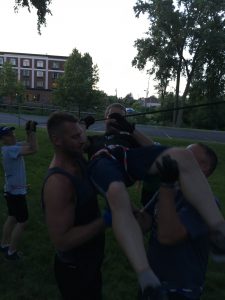 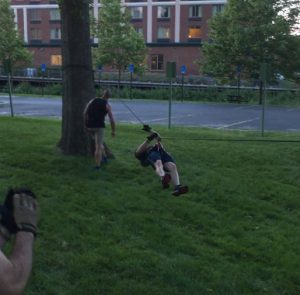 After gathering up all the gear and getting our rucksacks back in order, we prepared for the final push towards endex. We continued heading South on Main St., cut through St. Joe’s parking lot, crossed the railroad tracks behind the church, and we made our way across the parking lot of Lourdes University. From Convent St., we went South on Maple St. and then headed West on Brint Rd. After making our way through the neighborhood near Olander Park, we passed by The Colonel’s house and finally made it back to the start point! 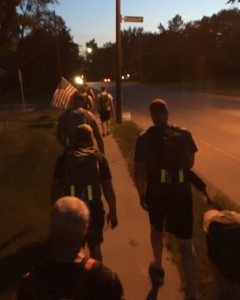 At Endex, we circled up and finished with a COT. Countorama, Name-o-rama, and BOM ensued. Despite the heat, the PAX pushed hard and completed the ruck with enthusiasm and everyone had a good time. YHC’s M met us at the front door and let us know that the food was ready!

We made our way to the back patio and ended the night with some strong 2nd F. Pizza, beers (and water and Gatorade), and good conversations had everyone feeling great and ready to tackle the next CSAUP event! 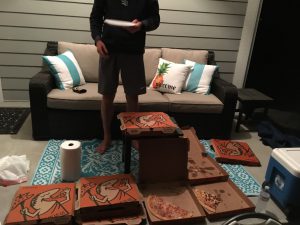