Bootcamp style beatdown either on the field or around the school. Meet in parking lot next to stadium. 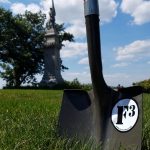 **Convergence in Perrysburg**
Scroll to top